I was watching Roku coverage of Times Square for the Midnight ball drop, and the broadcast kept glitching. In fact, it was so bad I almost missed the New Year fanfare. It all felt so “off.” I kept looking at the time displayed in the corner of the screen, but it didn’t feel right.  My computer, phone and kids all told me “Nah you’re not crazy. That shit’s three minutes off.”  Well, I almost missed ringing in the New Year. I said almost. Now I kinda feel like this has set up the feeling for the year. Scrambled, frenetic energy being hurled at us like a tennis ball machine. Well kids, after looking at the planets and the numerology, get your rackets. 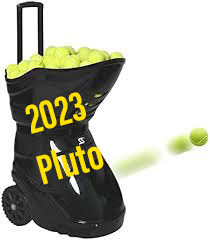 First, Pluto is now in the sign of Aquarius for the next 20 years. Pluto is the planet of destruction, transformation, and renewal. It’s the drill sergeant of planets. Move it! Move it! Move it! Get up! Are you a weakling?! Do you want to quit? Well, you can’t! Get up! Hate Pluto all you want, but it makes us better, stronger, faster. Some people pay trainers big money for this kinda coaching and we’re getting it for free.

Then there is Aquarius, the sign of optimism and asking for the betterment of the community. This tells us we should expect to see big changes across the globe — basically more of the same upheaval we’re seeing now until we collectively learn our lesson to stop hating and killing each other. Fingers crossed we don’t need the full twenty years. We must do better. It really is a long game we’re playing here.

But let’s focus on this year.

2023 is a Universal 7 Year. In numerology speak, that means it’s a year to expect sudden discoveries, insights, tap into your intuition, let go of what doesn’t work. It’s about making and taking the time to learn, reflect, and slow down. Plan, read, expect shifts and changes.

Do you see it already? Both the planets and the numbers are telling us the same message. Slow down and fix things NOW. Learn, do better, take a beat NOW. Hurry up and slow down. Its confusion and chaos aimed at finding our weak spots so we can give it attention and get better, stronger, faster. Does anyone remember the old show The Six Million Dollar Man? It was a show about a man who had bionic body parts. He was a cyborg of sorts before there was ever even a Robo Cop. The character, Steve Austin, went through a bunch of surgeries to become a super strong human. This year, maybe we should all pretend we are Steve Austin, and Pluto is the surgeon saying, “we can rebuild him, better, stronger, faster.” I won’t sugar coat it; this year probably won’t be easy because growth is never easy. But I promise you, it will be worth it. If you dream big enough… maybe you’ll see 6 million dollars, man.

The good news about all of this is we can expect magical things to happen! By magical I mean we’ll see things happen we couldn’t even fathom in our wildest dreams. We’ll figure out problems we thought were unfixable. And this is the perfect time to practice the law of attraction and intention setting. There is guaranteed transformation and rebirth for those who want to change their lives. For 2023, dream big and never quit! And if you need some coaching help, you know where to find me.  Happy New Year, my Bionic Beauties.

PS. Check out Season 2 of the Fossil and the Spawn podcast. Available everywhere and on YouTube – now with video!